The “2018 Global World New York Forum” co-sponsored by Yicai and Asian Financial Society was held on October 16, 2018 at the Yale Club in Midtown Manhattan. The forum invited a number of well-known personalities from the Chinese and American financial circles to discuss the theme of “Innovation and Openness – The Future of Global Economy and Trade”. At the beginning of the event, Jack Xu, chairman of Asian Financial Society, Susan Feng, YiCai Global’s Chief New York Correspondent, and Dorinda Elliott, SVP/Director of China Institute’s Center For Business, made the opening speeches to welcome nearly 150 guests and wish the complete success of this forum.

Robert Hormats, the current vice chairman of Kissinger Associates and former Under Secretary of State during the Obama era, delivered a keynote speech on Sino-US economic and trade relations. He said that Sino-US economic and trade frictions is not a recent phenomenon, so it is impossible to resolve them through a single negotiation or agreement. Instead, they need to gradually reach consensus in key areas and promote the establishment of an effective global trading system. He also cited that, as China’s position in technological innovation continues to rise, China itself needs domestic and international intellectual property protection. This is the same as the needs of the US government and enterprises. Therefore, the goals of the two countries are aligned. However, the Chimerica relationship has to mend from the top.

Roach said that it is undoubtedly a difficult period for Sino-US trade, but the lack of savings in the United States is the main cause of today’s trade and fiscal deficits. It is absurd to blame this problem on a single bilateral economic and trade relationship. This increase in tariffs on Chinese goods acts as a tax on American consumers. Furthermore, a reversal of the US position on trade with China will hinge more on intellectual property protection and opening of Chinese markets than on trade deficit reduction

At the forum, the guests also enjoyed the Charming Shanghai” photo exhibition and learned about the first China International Import Expo to be held in Shanghai next month. 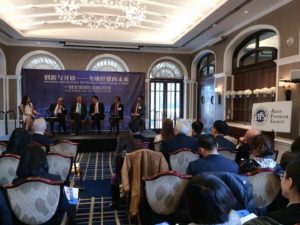 AFS Cares: Coronavirus
January 8, 2021
THE HUNT FOR UNICORNS: HOW SOVEREIGN FUNDS ARE RESHAPING INVESTMENT IN THE DIGITAL ECONOMY
December 30, 2020

Sebastien is currently working as the Head of Digital for North America at Chappuis Halder & Co, a global consulting firm covering main business lines of the financial services industry and offering customized solutions to corporate and investment banks, retail & private banks, and insurance companies. Prior to that, he was a project leader for Boston Consulting Group and a business application manager for Societe Generale, with industry expertise in corporate strategy and business development, IT & operations transformation, organization and governance optimization.

Sebastien strives to bridge the gap between Business and Technology, driving growth and efficiency in Financial Institutions by connecting them with the best innovations from the market. He has rich experience in defining business strategies and leading global transformations in Financial Institutions. He keeps meeting with startups, investors and organizations, and always trying to better understand the potential of the new technologies, such as blockchain, machine learning, and open architectures, which allows him to anticipate their impact and to create opportunities for Financial Institutions.

Sebastien obtained his EMBA degree from Harvard Business School, and also his  master’s degree in Physics, Computer Science & Industrial Economics from Ecole Polytechnique. He was honored the Top 10 FinTech Influencers and Top 10 InsurTech Influencers, and he is fluent in English, French, Japanese, Mandarin and Spanish.

Jeffrey Lam is the founder of Lam Generation, a leading hospitality real estate development firm in New York City.  Previously, Jeffrey worked with Helmsley-Spear focusing on the Manhattan market as a broker and consultant.  He also spent several years directly involved in the hospitality industry as a team member managing and restructuring new hotel startups.  Jeffrey specializes in the acquisition and development of real estate and manages new business opportunities for the company.

Lam Generation currently owns five hotels throughout New York City and has an additional two properties under development, each affiliated with Marriott, Starwood, or Hilton. The company’s first hotel development project, the Hampton Inn SoHo, was recognized by Hilton Hotels Corporation as the Deal of the Year in 2007. Their portfolio spans over 1,000,000 square feet of New York City hotel and residential development projects.

Jeffrey graduated from Pennsylvania State University, State College with a B.S. in Finance.  He speaks English and Cantonese.  He currently is involved in PREF a real estate organization.   His past board affiliations include Big Apple Greeters and Dollars for Scholars.

Associate / East Coast
Since 2017
Hootan co-leads Canaan Beta – the firm’s consumer seed program – and works closely with the fintech,SaaS, and consumer portfolio. He also serves a board observer at Ollie, JOOR, and ExecThread.Prior to Canaan, Hootan spent three years on LinkedIn’s business operations team in Silicon Valley,building his operational skills on the mobile and feed consumer product teams. As the company’s mobilebusiness operations lead, he contributed to and oversaw LinkedIn’s flagship mobile growth from 30% to 70% of total site engagement. Additionally, in 2015, he collaborated with executive and R&D leadership to execute the launch of Project Voyager, LinkedIn’s newly built flagship app and largest app release ever.Prior to LinkedIn, Hootan was an investment banker at GCA Savvian in NYC, advising high-growth. technology companies on M&A and private capital raising for enterprise software, adtech, and online content companies.Hootan graduated cum laude from Northwestern University with a B.A. in Mathematics and Economics and also holds a certificate in Financial Economics from the Kellogg Certificate Program for
Undergraduates.
About Canaan
Canaan is an early stage venture capital firm that invests in entrepreneurs with visionary ideas. With $5B under management, a diversified fund and over 190 exits to date, Canaan has invested in some of the world’s leading technology and healthcare companies over the past 30 years. Canaan’s focus areas include fintech, enterprise/cloud, marketplaces, frontier tech, biopharma, digital health and medtech. To learn more about our people and our portfolio, please visit canaan.com.

As the Venture Partner with Santander InnoVentures, Board Member for FINTECH Circle Institute, Co-Founder for RegTech Lab, and Mentor & Advisor for Blockchain Space and Startupbootcamp FinTech, Pascal Bouvier is an outstanding Fintech expert and talented multi-tasker who arranges everything perfectly.

Pascal Bouvier is a reformed executive, entrepreneur and operator with a broad experience in stage venture capital and micro PE investments in fintech small post revenue companies, startups, and turnarounds. He built the fintech investment arm of Route 66 Ventures, which later jumped to the list of top 10 global fintech venture firms. He is now employing his rich experience in helping Santander InnoVentures grow into one of the top 5 global fintech corporate venture firms.

Pascal Bouvier graduated from the University of Virginia Darden School of Business with the MBA degree and worked as the vice president at International Business Society, Darden Rugby Team; he got his bachelor’s degree from ISC Paris with the focus on Finance and Venture Capital. He is also a Chartered Financial Analyst (CFA) and fluent in Danish, French, and English.

Mr.Ben Fang is the founder of Morning Bright Investment Management, a global venture capital and private equity firm established in 2011 with businesses in China, New York and London. Ben used to work for Axiom Capital Management in New York as a Managing Director for 10 years from 2007 to 2017, and for Siements Medical as a Project Manager and Lead Architect for 6 years from 2001 to 2007. With the industry expertise in health-care, TMT, clean energy, finance and other sectors, Mr. Ben Fang and his company maintain a long-term strategic partnership with leading companies all around the world.